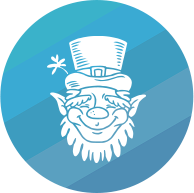 in the vast anonymous hallways of a behemoth American software company, our founder toiled late into the evening in preparation for the globalization of a company website into 42 markets. He removed components of text from the website, one at a time, placing them in resource files, giving an id to the html element that housed that text, writing a corresponding line of code to pull the text from the resource file and placing it in the appropriate spot on the web page - for every single piece of text on the website. Then he wrote more code for the conditional alteration and suppression of key sections and images of the site for each target country. Then his resource file was emailed to Ireland, where translators in over 25 languages went to work and emailed back their versions to a dedicated international department. Back in America, someone would add those resources back to the project, it would be recompiled, and then deployed to a special server. Only then, months later, would anyone see the translations on the website for the very first time. The initial wave of issues that resulted from seeing these translations in context were identified and the whole process would start all over again.

exhausted from the endless toil, depleted by the lack of oxygen in his windowless room, dizzy from the limited food choices of the vending machines in an office located light years from the nearest market, our founder collapsed into a deep sleep. And in a dream, a leprechaun appeared to him. He said: "I have been in the air vents of the office you send your files to and have watched as they arrive. What futility, what insufferable banality with which you - you so-called automation experts - do your work. What obtuse drudgery! How my friends and I delight in laughing at you!" And then he skipped off into the green hills, disappearing slowly from sight.

never offered any constructive ideas. But it did get our founder to thinking. There had to be a better way. If only one day the translators could, from anywhere in the world, type directly on the web page and have the translations immediately appear. He could go home early. He could just stay home all day in fact, and no one would notice. He would be the one laughing then. What if they could also manipulate segments and images just by dragging and dropping?

with a few of his coworkers who felt the same way, and as it so happens, the work did not end for them. But its futility did. On October 15th 2016, they emerged with GlobalizeIt, a globalization platform that realized their vision. Using their first round seed money they hired mercenaries to find the leprechaun and in the hills just outside of Cork, where he was located and executed. Now an expertly taxidermied bust of him hangs proudly in their office, always reminding them of their roots, and their original inspiration.

With GlobalizeIt your website becomes editable. See how it works

Launch your site in other languages today.